One experiment feeds another

One third of the fish experiment failed three hours in. Charlie thought it worked out just fine for the chickens. 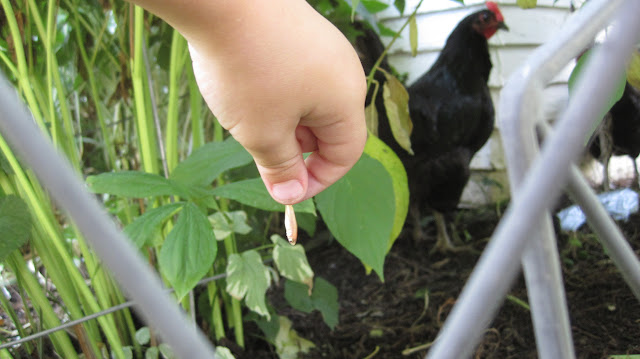 News and notes from the frontline

We've definitely slipped into a quiet rhythm of urban farm life with the chickens. Raising the chickens has come with surprisingly little overhead, which is welcoming given the current circus act we call a family.

If you keep them fed and watered, they seem pretty content to lay their eggs and avoid trouble for the most part. That's not to say they haven't caused their share of problems for Mel's Green Garden, tearing down dinner plate dahlias and hydrangea bushes. But Mel can't help bu love them (and their eggs).

Here are the highlights for the last few weeks...

The chickens and Harry seem to do just fine together even when chickens are outside the coop with him. Harry seems to know his boundaries, which is a relief given the lax door closing skills of a four year old.

The chickens were accidentally locked outside of the coop for a night along with Harry. After hearing a ruckus around 3am, an outdoor inspection revealed only one chicken and one dog. Convinced that the other two had been dragged away by a raccoon, we went back to bed.

In the morning, there were two! And by the afternoon, there were three again! The investigation remains unresolved...

The cherry tomatoes are safe

We had no idea what would happen to the vegetable garden with free running chickens. For now, it appears that the coveted cherry tomatoes have survived the chickens - and the heat - and will produce a giant bounty.

The coop has held up

The coop construction was a design-on-the-fly experiment and it's held up wonderfully. 10% is due to construction. 90% is due to the fact that the raccoons can probably find tastier and more easily acquired dinners in the neighborhood trash cans.

I need to write a post on coop construction....

This is our story.